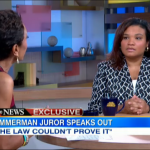 Dan appeared on Good Morning America this morning to discuss Robin Roberts’ exclusive interview with one of the Zimmerman jurors.  Dan says, “As we were preparing for a verdict here, saying, the fear of the defense is that maybe these jurors will base this decision on emotion, rather  on a broader sense of right and wrong, as opposed to following the letter of the law.  And it sounds like that’s the exact debate that Maddy had in her head, which was on the one hand she felt that there was moral culpability on the part of George Zimmerman. But she did say, she came back to this more than once in your interview, she feels she did the right thing as a legal matter. She effectively had no choice.”  Watch the segment here.