04 Jun Dan on Zimmerman Behind Bars 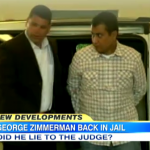 Dan appeared on Good Morning America today to explain the legal implications of George Zimmerman’s bond being revoked this weekend. Zimmerman, the former neighborhood watch volunteer charged with murder in the killing of Trayvon Martin, surrendered Sunday and was jailed two days after Judge Kenneth Lester revoked his bond, saying the defendant and his wife had lied to the court in April about their finances so he could obtain a lower bond. So did Zimmerman lie to the judge? And could he keep Zimmerman behind bars for a long time? “He could, but I don’t think it’s going to happen… the purpose of bail is not to punish but to make sure that he shows up, it’s to make sure the amount is right, so that it is a significant enough amount that it would put a huge dent in his life, his family’s life, etcetera to lose it,” answers Dan. It will not work in Zimmerman’s favor to have lied to the judge, and though Zimmerman would say he did not, “this is one of those unique situations where what the judge thinks about you is really important,” explains Dan. There will be a ‘stand your ground’ hearing where the defense is going to argue that the judge should throw out the case, and there, Zimmerman’s credibility is going to be incredibly important. “In that sense, this might even be a bigger setback than it ordinarily would be,” says Dan. He predicts that the judge will have to come up with a new number to ensure Zimmerman’s presence. Watch the full video here.