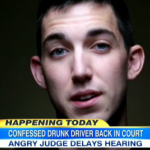 Dan also spoke on Good Morning America about the case of an Ohio man who admitted to causing a fatal car crash while driving drunk over the Internet. Matthew Cordle posted a 3½-minute video last week in which he admitted he killed a man from a Columbus suburb and said he “made a mistake” when he decided to drive that night. However, yesterday he appeared in court and plead not guilty, causing the judge to become livid. In Ohio, a guilty plea locks in the judge, and the judge believes the attorneys were spooked by not knowing how she’d sentence him, and used the not guilty plea as a maneuver to face a new judge. Dan explains, “It seems pretty clear he’s going to plead guilty, and once you commit to pleading guilty, there’s only one question: what’s gonna be the sentence? And who determines that? The judge. And the judge you get can make a big difference.” Watch the segment here.