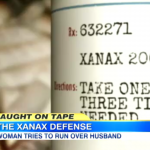 Dan appeared on Good Morning America today to discuss the case of a wife who alleged tried to kill her estranged husband by running him over with her SUV. The Salt Lake City woman, Brenda White, managed to break her husband’s legs and crash into an office building in the process. Brenda also appeared at her husband, Jon’s office, right before the attack, playing the song “Angry Johnny” by Poe, emphasizing the lyrics “I wanna kill you.” She later blamed Xanax for her actions – so is she guilty of attack, or are anti-anxiety drugs the cause? Further, because a friend of White claimed to have heard jurors discussing the case outside of court, which is strictly prohibited, the judge has declared a mistrial. While Dan believes this is a “severe punishment” considering how far along the case is, Nancy thinks it was a necessary one. The next twist? This misstep by the jurors was reported by a friend of the defendant (Brenda White). Stay tuned for what happens next in the case. Watch the video here.