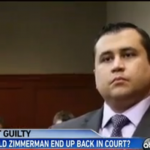 Dan appeared on World News with Diane Sawyer to discuss what he predicts is Zimmerman’s next move.  Dan says, “How does he live his life?  We’ve seen this in a number of high profile acquittals where at least some of the public is very angry about it; O.J. Simpson, Casey Anthony.  And they have a real difficulty figuring out how to move on.  The difference here is that Zimmerman also has a real community of supporters.”  Eric Holden has stated that he’s continuing with a federal investigation into civil rights violations.  Is this the next thing to watch?  Dan says, “I think it is very unlikely.  They would have the same hurdles that they had in the state case, they would then also have to show that it was motivated by race.  I think that more likely is a civil lawsuit where the family would sue George Zimmerman.”  Watch the full episode here.