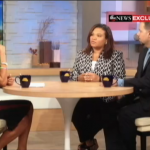 Dan appeared on World News with Diane Sawyer to discuss Robin Roberts’ exclusive interview with Zimmerman Trial juror B29.  Juror B29 talked about what happened during the crucial hours of deliberation and what she believed.  Dan says, “This is what the defense feared, some of the jurors might decide the case based on emotion, and not based on the law. Even she said, she said she still thinks she did the right thing, because she followed the law, but if she followed her heart, she would have hung that jury.  There was debate.  They asked for the manslaughter charge read back. If there had been one or two Maddy’s back there, it could have been a hung jury.”  Watch the full episode here.