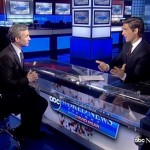 Dan joined David Muir on ABC’s World News Tonight With David Muir, to discuss the latest on Robert Durst. The Los Angeles County DA announced on March 16th that Durst was charged with one count of first-degree murder with the special circumstances of murder of a witness, as well as lying in wait and gun use allegations. These charges are in connection with the 2000 murder of Susan Berman and can carry the death penalty. Durst was arrested in New Orleans over the weekend under two new charges: convicted felon in possession of a firearm, and possession of a weapon with a controlled dangerous substance, which was a small amount of marijuana. This was all on the heels of the dramatic finale of the HBO series based on Durst called “The Jinx” where he was recorded saying that he “killed them all”. Dan discusses the impact of that recording with David, watch the full clip from WNT here.