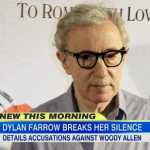 Dan appeared on Good Morning America Monday, February 3rd, to discuss Dylan Farrow’s claim that her adoptive father, Woody Allen, molested her as a child. These allegations are 20 years old and no charges were ever brought forward. Additionally, an independent medical expert said there was no conclusion of molestation. Could these new details change the situation legally? Says Dan, ” No, they won’t. In large part because the  statute of limitations has expired. Even if you assume possible extension that can apply to assaults on children, under no scenario is it possible charges will be filed at this point. And remember, that they did investigate this back in the day. They didn’t say we are determining that it did or didn’t happen. They said they didn’t feel they had enough evidence to move forward. That’s one of the tough choices prosecutors have to make every day. They have to ask themselves two questions, in a case like this. Number one, do we believe it and number two, do we believe that we can get a conviction? Do we believe that we can prove this case beyond a reasonable doubt? It seems that the answer to both questions together back in the day was no. ” Watch the full clip here.