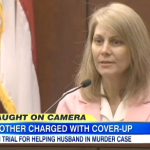 Dan appeared on Good morning America, Friday, February 14th to discuss the North Carolina woman who is accused of killing the mother of her stepchildren. Amanda Hayes has denied the accusations saying her husband was the sole killer. The 41-year-old wife and mother is charged with first degree murder, accused of helping husband the mother of his two young children during a bitter custody battle. Prosecutors say she also helped dispose of the body and that she’s now simply pretending to be a victim. Says Dan, “Her defense is that, yes I was there, in the fight leading up to what became the murder actually she admits she may have been the cause of the fight. But she says he throws her out of the house, says get out of the house with the kids. She says he says we want to talk alone. He and the victim. She says she comes back and he says everything is okay. That’s when she says the murder occurred so she didn’t know about it, she says. She only learns that there is a body in the truck that she is driving, she says, much later on. So she’s claiming she had nothing to do with either the murder and she says she was not a willing accessory after the fact because she says she was threatened. Her testimony becomes crucial, and that’s why that question about her being an actress in the past is so important, because if the jurors believe her, she could absolutely get acquitted.” Watch the full clip here.