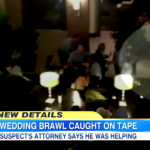 Dan appeared on Good Morning America today to follow up on his appearance Tuesday, talking about a wedding gone wrong outside Philadelphia, where more than one wedding party got involved in a brawl.  At the Sheraton Society Hill, the brother of one of the grooms, Matthew Sofka, 26, was charged with assaulting a police officer, reckless endangerment and inciting a riot. So what defense does he have?  One of his lawyers claims that the brawl had already started when he arrived, to which Dan says, “It’s somewhat relevant, but you can still be guilty if you escalated the fight even if you didn’t start it… the question isn’t ‘who started,’ the question is ‘what did he do?'” Dan also goes on to say that his defense isn’t saying that he acted out of self-defense, but rather that he was victimized in the fight. “It’s tough for the defendant… the video tape is going to be very important,”  explains Dan, continuing, “In cases where there is a video, you start seeing the analysis go frame-by-frame, every movement that occured on the video tape, if this goes to trial, becomes absolutely crucial.” Watch the segment here.