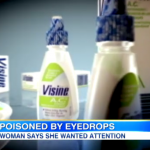 Did a Pennsylvania woman poison her boyfriend’s water with visine? Dan Abrams appeared on Good Morning America today to discuss. According to state police, Vickie Jo Mills has  told investigators that she placed Visine eye drops into her boyfriend, Thurman Nesbitt’s, drinking water 10 to 12 times over the last three years, wanting attention. His doctor discovered the poison when treating symptoms.  She faces charges including assault and reckless endangerment. Why not attempted murder? “That tells you what [the police] are thinking about her motivation; they are not claiming that she was trying to kill him, they’re saying in essence that she was trying to harm him,” answers Dan. “They’re also saying that she’s claiming that she was doing this for attention, to get his attention, and that’s what I think makes this particularly sad, there’s probably a level of sympathy towards her on the part of the authorities,” he continues. He also explains though that wanting attention is not a legal defense, and also predicts that this is the kind of case that never goes to trial. “If she really did confess, as the authorities claim,” says Dan, “those are the kinds of cases that… tend to work out an agreement, they tend to give a very low sentence.” Much of what will happen next will be determined by her boyfriend, Nesbitt. Watch the segment here.