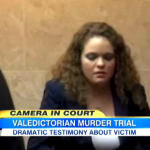 Dan appeared on Good Morning America today to continue the ongoing coverage of a Michigan murder trial: former high school valedictorian Jeffrey Pyne accused of murdering his mother. In the latest, Pyne’s girlfriend took the stand, and Dan, along with fellow legal analyst Nancy Grace, analyzed the developments following her testimony: “There’s no question that she’s doing exactly what the prosecution wanted, which is to lay the groundwork for their motive, which is this is a mother who is out of control, who is slowly descending, that she’s off her medication, that he’d been worried about it, that he’d been talking about it…. on the other hand, it provides something if the jurors don’t want to convict here.” Dan believes ultimately, though, that the hands and the alibi will be the most important pieces of evidence. For more, watch the video here.