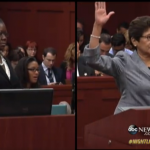 On Nightline last night, Dan discusses the impact of Trayvon Martin’s father, Tracy’s, testimony on the 911 audio recording in which either Zimmerman or Martin can be heard screaming.  Today, the defense had their first full day of witnesses on the stand.  Throughout the trial, Zimmerman’s friends and family have been called to testify that they recognize the voice on the phone as his.  It’s one of the most crucial questions in the Zimmerman case: who was heard yelling for help on the 911 phone call placed that night?  Prosecutors argue that it was the voice of 17-year-old Trayvon Martin.  If the voice can be determined, it would give insight into who was on top, who was being attacked, who was throwing the punches.  According to two police officers, when Tracy Martin had originally heard the audio recordings, he claimed that it wasn’t his son’s voice.  Watch the segment here.