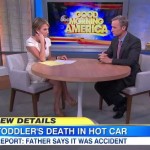 Dan joined Amy Robach at the Good Morning America round table, on the first day in July of 2014, to discuss the story of a man from Georgia who is now charged with the murder of his 22-month old son. Justin Ross Harris says he accidentally left his son in the car for seven hours on a 90-degree day, but is there more to the story?  Harris is still insisting to Georgia police that this tragedy was an unfortunate accident. But police are also insisting this wasn’t simple negligence and have charged Harris with murder and cruelty to children. Harris, who had researched children dying in hot cars, told police this was because he was fearful this could happen. Dan comments, “I think there have been two key facts that have been troubling the police. Number one, we’re one is those internet searches and number two is the fact they believe he went back to his car in the middle of the day. Both of those suggest to police this wasn’t just an accident. But they’re going to have to be able to link these two.” Watch the full clip here.