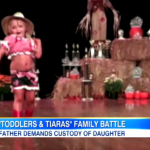 Dan appeared on Good Morning Americatoday to discuss a custody battle surrounding the popular TLC show ‘Toddlers and Tiaras,’ which focuses on the world of beauty pageants for young girls. In this particular case, 4-year-old Maddy Verst’s parents are in a fight over her wearing fake boobs and butt while dressing as Dolly Parton for a pageant. Her father is now demanding sole custody from her mother, Lindsay Jackson, who has been the primary caretaker but who he believes sexually exploited their daughter by dressing her so provocatively. There is now a court-ordered temporary ban on all pageant activity for Maddy until further notice. The court scene on Saturday was intense, as the judge threw out reporters, placed a gag order on Jackson, and closed the hearing. The next court date in August 31st — so what will happen then? Dan explains that what’s dangerous for the mom “is the psychologist court-ordered report… the psychologist is suggesting that the dad become the primary custodian,” continuing that “if the only reason for that is these pageants, I think that’s a very dangerous precedent to be setting.” “When the court looks at this, you always look at what’s in the best interest of the child, but you have to look at the totality of the circumstances; you can’t look at one incident and say ‘because of this’ …this is a tough line to draw,” says Dan. Watch the video here.