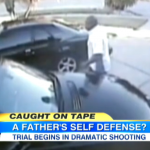 Dan appeared on Good Morning America today to discuss the case of Timothy Davis Sr., whose trial set to begin today. Davis Sr., a retired police officer, claims to have accidentally fired his gun after his 22-year-old son jumped him during an argument in October 2011, shooting him twice in the torso and killing him. While his wife and daughter side with him,  prosecutors say there is evidence suggesting otherwise, with surveillance video of  him allegedly retrieving a gun from his car and then aiming it at his son. Dan explains, “His testimony is going to become so crucial. He’s going to have to testify in this case; he’s going to lay out… exactly what he did, why he did it, why he felt this was self-defense, why he felt this was justified, and regardless you would think that the effort here would be to get these jurors to feel for him, to feel bad for him regardless of what they think led up to this incident. For more, watch video of the segment here.