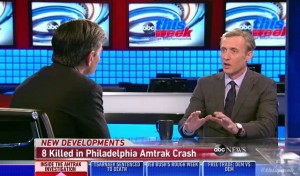 Dan joined George Stephanopoulos on This Week, Sunday, May 19th to discuss the potential legal implications for the Amtrak train crash that occurred in Philadelphia. Dan commented, “There’s the possible criminal and there’s civil. Let’s start with criminal, which is could the engineer be charged with a crime? Theoretically, yes, but they would have to have found that he did something specifically wrong, meaning the crash itself doesn’t necessarily mean a crime was committed. There has to have been recklessness or intentional conduct or something that he did that would mean that there could be a crime. They’re going to look at that. Number two is civil, which is all these people that were injured are now going to sue. But what’s interesting is that in 1997, there was a law passed that basically said there’s a cap of $200 million total for every — for all the victims together in a train accident.” Watch the full episode here.

ABC News, This Week, This Week With George Stephanopoulos