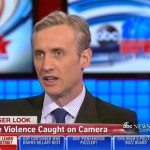 Dan appeared on This Week With George Stephanopoulos, Sunday, April 12th to discuss, and take a closer look at the police shooting in South Carolina. Officer Michael Slager from Charleston, South Caroline, is caught on video killing 50-year-old, unarmed African American man, Walter Scott with 8 shots, in the back making this the latest and most chilling in a series of police confrontations that have spun out of control. Dan sits down with George, Pierre Thomas and the long-time police commissioner from New York City, Ray Kelly, to discuss these all too frequent occurrences. Watch the full segment here.