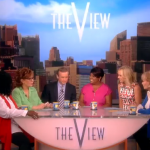 Dan appeared on The View yesterday to discuss DOMA and the Proposition 8 rulings.  Yesterday morning, the Supreme Court ruled the Defense of Marriage Act unconstitutional and stated the Proposition 8 had no grounding.  Dan explained what these rulings actually mean for same-sex couples.  Dan says, “This is a big set of two rulings from the U.S. Supreme Court and there is no question that this is a victory for same-sex couples.  In one case they are saying that if you are legally married in a state, the federal government can not discriminate against you and not give you benefits.  If you are married in one state and you go to another state, you can now apply to try to get it.  It gets a little complicated.  So, that was the other case.  A state initiative which banned same-sex marriage.  The court sort of punted on that one.  The court didn’t address it directly.  But by punting, what’s going to happen now in the state of California, is same-sex couples will be able to get married.  It means that it won’t have an impact throughout the country.  There hasn’t been a fundamental right established.”  Watch the segment here.