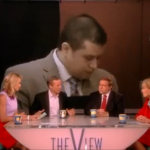 This past week, there have been some major bombshells in the Trayvon Martin murder trial, from new evidence being introduced to Zimmerman waiving testimony.  Yesterday, Dan made an appearance on The View, alongside Dr. Lawrence Kobilinsky and Sunny Hostin, to discuss where the case stands as the trial winds down to its last few hours.  Dan says, “This has been, in my view, a tough case for the prosecution.  If you think of it this way, if you believe that there’s a reasonable chance that George Zimmerman was on the bottom, being beaten by Trayvon Martin and that he couldn’t get away and that that’s when he shot Trayvon Martin, then it’s not guilty, it’s that simple.  And there have been a number of witnesses, some of who had the very best view of what was happening, who say that its exactly what they saw.  Now even if these jurors aren’t sure, even if they say, ‘Well, on the other hand, there were witnesses who said something else,’ prosecutors still have the burden of proving it beyond a reasonable doubt.”  Watch the full episode here.