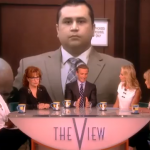 Dan appeared on The View yesterday to discuss whether the prosecution’s case was strong enough to put Zimmerman behind bars.  On Friday, the prosecution rested to decide whether George Zimmerman did murder Trayvon Martin, and now it is the defense’s turn to prove their client innocent.  Dan says, “Things have gone very well for the defense in this case.  I would be very surprised if there was a conviction on either second degree murder or manslaughter in connection with this case.  Both based on the witnesses that we’ve seen and on the law.  Let me give you an example.  One witness says that George Zimmerman was the one on top, another witness says that it was Trayvon Martin who was on top.  Right away, that is advantage to Zimmerman.  Why?  Because the prosecution has the burden to prove that case beyond a reasonable doubt.”  Watch the segment here.