10 Apr Dan on the Hakkens 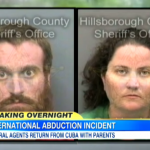 Dan appeared on Good Morning America today to discuss the U.S. parents accused of fleeing to Cuba with their kidnapped sons. Joshua Hakken, 35, and his wife, Sharyn Hakken, 34 kidnapped their two young sons, Cole, 4, and Chase, 2, who were in the custody of their maternal grandmother, taking them via boat to Cuba. Today, they were returned to the United States early this morning in the custody of FBI agents. Considering the U.S. and Cuba don’t bless have an extradition treaty, many are surprised this was resolved so quickly. Dan explains, “Remember that none of the alleged kidnappers here have any connections to Cuba, which would have changed this fundamentally. I think a lot of people say, ‘Well, there’s no treaty, why would they have cooperated?’ Well, why not? Meaning in the sense that there’s no reason really that the Cubans would want them in the country.” The parents face charges of kidnapping, burglary, child endangerment, and false imprisonment, at least. For more, watch video of the segment here.