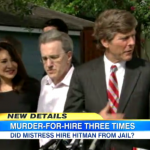 Dan appeared on Good Morning America today alongside host Robin Roberts and fellow legal analyst Nancy Grace to discuss the latest testimony in trial of Jeffrey Stern, accused of plotting a failed attempt to murder his wife, 54 year-old Yvonne Stern. Since that accusation, it has come forward that he had an accomplice in mistress Michelle Gaiser, and together they created three different plots to kill Yvonne, and though all failed, she was shot in the stomach during the third. Now Gaiser is apparently plotting to murder Jeffrey Stern from behind bars. “It’s really hard to keep up,” Roberts says of the case. “This case is a mess,” responds Dan. Nancy Grace explains that this latest development is a “huge setback to the state, because she – the mistress – is the chief witness against the husband… Jeffrey Stern.” Dan goes on to explain one further complication: “remember, the wife is supporting him,” says Dan, continuing, “that’s what makes this case so hard, not only do you have the problem now that the chief witness may be trying to kill Stern, you also have the fact that his wife is on his side, meaning – she’s the alleged victim here, think about that, she’s the one they tried to kill three times and she’s saying ‘this is my man.'” Dan and Nancy disagree, however, on how much Michelle Gaiser is needed for the case to proceed. Watch the full discussion here.