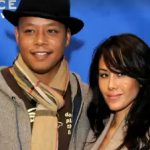 Dan appeared on Entertainment Tonight yesterday to discuss the legal troubles of Terrence Howard. On Tuesday, a judge instructed him to stay away from his ex-wife, Michelle Ghent, who claimed the Oscar-nominated actor “sucker punched” her in the face, “grabbed” her neck, threw her against a mirror and tried to choke her three times during an argument in a vacation rental home in Costa Rica on July 29. Howard denies the allegations, even though new photos of a bruised Ghent have surfaced. Dan explains, “It’s very powerful evidence in a domestic abuse case to be able to introduce photos like these.” Dan continues, “Here he’s saying ‘I didn’t lay a hand on her’ so the question is how did she get these injuries?” Howard has a lengthy history of domestic violence. For more, watch the full episode here.