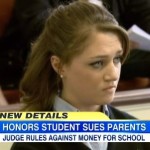 Dan appeared on Good Morning America March 5th to discuss the New Jersey teen who attempted to sue her parents to pay for her school tuition even though she’s moved out of the family home. The teen, Rachel Canning claims she was kicked out of her home when she turned 18 but her parents are claiming that she chose to leave. Says Dan, “It’s a fascinating legal question and technically if you’re 18 in the state of New Jersey, it doesn’t immediately mean you’re emancipated. Meaning, it doesn’t immediately mean that the parents do not have legal responsibility. So it becomes a fact-specific question. One of the key questions is, did she leave or was she kicked out, meaning if she did leave the house on her own and then developed her own independent life to some degree which it seems the court does believe she did then the parents aren’t financially responsible. But if they had effectively kicked her out, if she was still within their “sphere of influence”, is the legal phrase, then they could have been legally responsible.” Watch the full clip here.