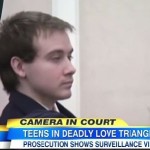 Dan appeared on Good Morning America, Friday, August 8th to discuss a love triangle that turned deadly between three friends back in 2012. Prosecutors allege that Pedro Bravo, 20, sedated his friend, Christian Aguilar, with a concoction of drugs and then used a belt to strangle him, after discovering that Aguilar was dating Bravo’s ex-girlfriend, Erika Freeman. Prosecutors showed photo evidence of the belt they say Brave used to kill Aguilar, as well as photos of a cracked windshield covered in duct tape and blood stains. Surveillance footage shows Bravo buying a shovel, duct tape, bandages and over-the-counter sleep aids the night before Aguilar went missing. Police said Aguilar’s body was found in a remote field 22 days after he went missing but Bravo has denied being the culprit. Says Dan, “They’ve got surveillance pictures, the defendant’s journal, blood evidence, computer searches. They have just about every kind of evidence possible…And the defendant admits he had a fight with the victim on the day he disappeared and punched him repeatedly, but contends he was alive when he left him.” Watch the full clip here.