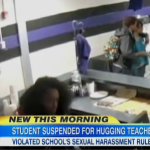 Dan appeared on Good Morning America December 17, 2013, to discuss high school student, Sam McNair who was suspended from school and will miss graduation for hugging one of his teachers. While Sam’s friends say in interviews that he is a “hugger”, Dan sides with the school’s decision based on the video evidence of the incident. Says Dan, “Headlines everywhere were “Student Suspended for Hugging Teacher”, but when you actually watch that video and according to her, this was more than a hug. You see at the end there, it appears that he is trying to kiss her on the back of the neck.  Now why is this teacher not entitled to a sexual harassment free zone? This is not like that six year old we read about where he tried to kiss a classmate. This is a 17 year old senior here, who is not just hugging but appears to be trying to kiss, he denies it… look, you see her at the end trying to push him off, this is an unwanted touching, imagine if this were to happen in the work place.” Watch the full clip with more details here.