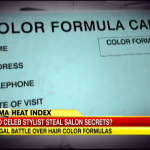 A stylist who used to work at John Sagah Ltd. Salon is being sued for taking her clients and the salon’s secret hair colors to another competitor salon.  On who owns the color formulas, Dan says, “The judge is taking this seriously.  Meaning an emergency order was entered saying you can’t use those secret proprietary formulas in the future.  It’s hard to see how they’re going to enforce that.  For now, the court is saying you can’t use the exact formulas, but you can go after the clients.  The idea that they’re calling clients and lying to them, that’s a real – that’s a problem, if that’s happening.  But putting that aside because they deny that.  But even if that’s not happening, it is an interesting question, right, about someone going from one salon to another.  And as you put it, they can just take their clients.  They become valuable, the colorists then.”  Watch the segment here.