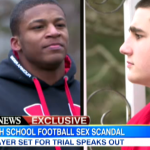 Dan appeared on Good Morning America today to discuss a rape case in Steubenville Ohio. Two high school football players allegedly raped an intoxicated female, and are now being charged with sexual assault. Further complicated the matter is that the accused, the victim, and the witnesses are both juveniles and divided across state lines (the town lies on the border of Ohio and West Virginia), making it difficult to subpoena them. Dan says, “You’re talking about two sets of judges: you’re talking about a West Virginia judge saying ‘I’m not going to force these West Virginia kids to go to Ohio to testify in the Ohio case. Why? This is a juvenile proceeding. It’s not a typical criminal case, and as so, I don’t think that the rules that apply in normal criminal cases about forcing people to testify necessarily apply in the juvenile case.” For the full report, watch the video here.