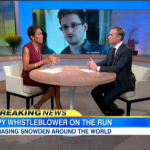 The US filed espionage charges against Edward Snowden who is charged with theft of government property, unauthorized communication of national defense information, and willful communication of classified communications intelligence information to an unauthorized person.  Snowden had fled to Hong Kong before leaking the information and is seeking refuge in nations where he thinks that the US will not be able to have him extradited.  Dan appeared on Good Morning America this morning to discuss the legal implications of Snowden’s evasion of U.S. authorities.  Dan says, “You’re talking about political negotiations here. There’s very little that they can do legally with the country that he’s talking about going to. When you’re talking about something like Ecuador, there is an enormous irony, of course, because Ecuador was one of the worst records when it comes to freedom of the press.  So he’s definitely going to places that he thinks that the U.S. will not be able to get him from. There is an extradition treaty with Ecuador, by the way, but there are exceptions when it’s a political incident and no question that he will be relying on that in an effort not to get extradited. He’s facing three felony charges right now.  I think they’d prefer not to file the more significant charges now. Yes, in the hope of increasing the chances that they can get him back because if they throw the book at him, I think that some of these countries will say, wait a second, this isn’t fair.”  Watch the segment here.