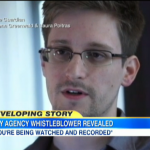 Dan was on Good Morning America this morning, to discuss whether Edward Snowden will be able to find asylum either within or outside of the United States.  Last week, Snowden outed an NSA activity, in which they were monitoring and recording the phone calls and international emails of US civilians without prior notice.  The director of the intelligence agency is stating the severity of the damage done to the United States’ intelligence capabilities.  Dan discusses the issues that the government faces in prosecuting Snowden: “The first question is going to be what are they going to charge him with?  They’re going to throw the book at him.  The question is going to be how heavy is that book?  And that’s going to be the issue that the government decides here.  Number two, and connected to that, is how do they get him here for trial?  And if he stays in Hong Kong, there are real questions.”  Watch the segment here.