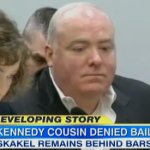 After waiting 11 years for the chance to be released on bail, Michael Skakel was denied the request by the same judge who overturned his murder conviction. Explains Dan “This morning Michael Skakel is waking up behind bars again, denied bail, by the same judge,  who just last month, overturned his 2002 murder conviction for the 1975 murder of neighbor, Martha Moxley. Skakel’s new attorney sought the release of the 53 year old nephew of RFK widow, Ethel Kennedy, after Judge Thomas Bishop ruled that Skakel’s original attorney,  Mickey Sherman, was so ineffective, that the conviction ” lacks reliability”. The prosecutors argue they have a good chance of getting the courts ruling overturned by a higher court and while the appeal is ongoing they say, he should remain behind bars .” Watch the full story  here.