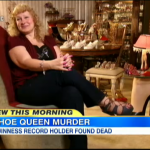 Darlene Flynn was a Guiness Book of World Records Holder for her 15,000 shoe-related objects decorating her home, was found dead in her swimming pool.  Her boyfriend, Justin Smith, has been arrested in connection to the murder.  After reports of a fight, police arrived at the home, discovered her body in the pool, and saw a shirtless Smith running away from the backyard.  He was arrested a few hours later.  On Good Morning America, Dan appeared to discuss how things are looking for Justin Smith.  Dan says, “When you find a dead body like this in the pool with blunt force trauma, the first thing that you are going to want to know is who did she know, who were those closest to her.  Those are the people that you are going to look at first.  Then when you see her boyfriend running away from the scene without his shirt on, they had to capture him later, following a report of a domestic disturbance in the house, it’s not that surprising that he’s been arrested.”  Watch the segment here.