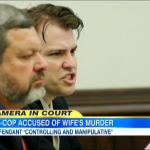 The fate of Brett Seacat, a former Kansas cop accused of killing his wife and committing arson, now rests in the hands of the jury.  Today, Dan appeared on Good Morning America to discuss the difficulty of the jurors in deciding how this case should be ruled.  Dan says, “His whole job here is to plant some kind of seed of doubt.  If 12 people were put in a room and said, do you think it’s likely Brett Seacat killed his wife after listening to all of the evidence? I’m confident that you could find 12 people where the answer would be yes. The question here isn’t that.  The question is, is there proof beyond a reasonable doubt? That’s when the jurors start nit-picking. That’s when they go into each and every pose of evidence and say to themselves, well, yeah, but.  The reason this is going to be a close case is only because of reasonable doubt.”  Watch the segment here.