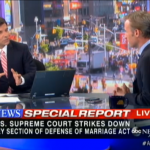 The Supreme Court ruled the Defense Against Marriage Act unconstitutional this morning.  What this ruling means is that couples who are legally married anywhere in the United States will be able to get the federal benefits such as social security and death benefits.  Dan appeared on Good Morning America to discuss implications of the ruling.  Dan says, “This is a case where you were talking about states that actually allowed gay marriage but were then denied federal benefits because of the Defense of Marriage Act.  So this is a big win, but if the opinion is as sweeping as it sounds like it is, that’s going to be a big surprise.  Meaning everyone was expecting there to be some narrowness to this ruling.  Not an all out recognition that there is an equal protection issue here because if there is, you would think that that apply to the other case that the U.S. Supreme Court is also considering in regards to Proposition 8 in California.”  Watch the segment here.