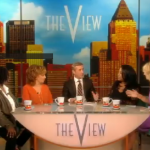 Today, Dan appeared alongside the ladies of ABC’s The View to discuss the landmark ruling made this morning by the Supreme Court of the United States regarding President Obama’s health care reform. The Court upheld the mandate requiring Americans to buy health insurance or pay a penalty, the key part of President Obama’s signature health care law, the Affordable Health Care Act. The court ruled 5 to 4, with Chief Justice John Roberts siding with the majority. They found the act constitutional in regards to Congress’s power under a taxing clause — the government will be allowed to tax people for not having health insurance. (They found it  unconstitutional under the Constitution’s commerce clause, however.) Dan breaks down the complicated law for viewers: “The Obama administration won in the end… There was this huge argument: Can you be forced to buy health care? And in essence, what the court is saying is no, you can’t be, but as long as you consider it a tax, the government has the right to tax people… so, basically what the court is saying is, depends on how you look at it, and if you look at it this one way, as a tax, then it’s constitutional.” The four hosts and Dan discuss the enormous debate surrounding health care, and how most Americans simply just don’t understand what it actually will mean for them, trying to simplify it. Watch the full video here.