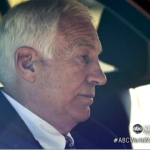 Dan appeared on ABC’s World News with Diane Sawyer last night to discuss the trial of Jerry Sandusky. Sandusky is the former Penn State football coach accused of child sexual abuse. Over the course of the last few days, his victims and witnesses have taken the stand, presenting harrowing tales of Sandusky’s behavior. As the prosecution wrapped its case with its final witnesses, Dan spoke with Diane about whether the eight young men who spoke out against Sandusky were about to “lock up the case.” While “the defense has been able to point out inconsistencies as to when did things happen, how often did they happen,” Dan still believes the prosecution is strong. “When you’ve got witness after witness after witness offering these consistent accounts of what happened, how it happened, the grooming process, where things happened – that’s what makes this case so incredibly compelling,” states Dan. How can Sandusky’s defense proceed, asks Diane? Answers Dan, “I don’t really see how they present a substantive defense without Sandusky himself taking the stand, and I don’t see how they put Sandusky on the stand.” Sandusky faces a lifetime sentence at most, up to 20 years on each charge. The trial resumes Monday. Watch the full video here.