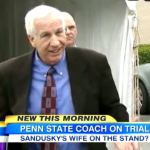 Dan appeared on Good Morning America today to discuss the latest developments in the Jerry Sandusky case with Robin Roberts. Currently, the latest news is the possibility of Jerry Sandusky taking the stand in the ongoing child sex abuse trial against him. Sandusky is on trial for 52 counts related to accusations of sexually abusing 10 boys over a 15-year span. The former Penn State football coach has denied the charges. So will Sandusky himself testify? “Ordinarily,  I would say no way he’s going to take the stand… looking at the kind of evidence that’s come in in this case, I say it seems it could be their only hope, and then yet you listen to how he performed in those media interviews, and you say to yourself how could they possibly put him on the stand, he was a disaster in those media interviews,” says Dan. Despite this complicated scenario, Dan ultimately believes that Sandusky will not testify himself.  What about his wife? Will she testify? Could she help? asks Roberts. Dan answers, “The real help she can be is to humanize him… in the end I think she is a character witness for him.” The case could wrap this week. Watch the full video here.