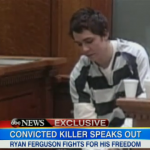 Dan appeared on Good Morning America today to discuss a story that he will also investigate on Nightline tonight: the case of Ryan Ferguson. Ferguson, 28 years old, has spent almost a decade in a maximum security prison for a brutal murder he, and many others, insist he didn’t commit. Now, he may be days away from freedom. In 2001, Kent Heitholt, a sports journalist at the Columbia Daily Tribune, was found bludgeoned and strangled to death in a parking lot. Three years later, police pulled Ferguson over and questioned him for hours about the incident – and he never wavered in his insistence that he had nothing to do with the murder. However, at the same time,  one of Ferguson’s classmates, Charles Erickson, was in another interrogation room down the hall, telling police that he and Ferguson had committed the crime and that it had been Ferguson’s idea. Erickson said the pair had been out together on that Halloween night when Heitholt was killed. He was charged with murder even though the only two witnesses against him have since recanted their statement and no DNA linked him to the crime scene. “It’s hard to have much hope, at this point, in the justice system based on what they’ve done,” says Ferguson. For the full story, including Dan’s interview with Ferguson, watch the clip from GMA here and tune into Nightline tonight.