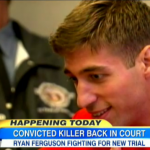 Also on Good Morning America today, Dan discusses the case of Ryan Ferguson, the Missouri man convicted of killing a journalist. Now, he is fighting for his freedom in appeals court. In 2005, Ferguson, 28, and his friend Charles Erickson were both charged with robbing and killing newspaper editor Kent Heitholt as he left work at the Columbia Daily Tribune in October 2001. Erickson accepted a plea deal, testifying that he and Ferguson committed the crime, and Ferguson was convicted of second-degree murder and robbery, and sentenced to 40 years in prison. Ferguson’s father, Bill, has been working to free his son since he was arrested for the crime in 2004 and now, after nine years behind bars, an appellate court will hear arguments later today in a case. The state’s two key witnesses have recanted their testimony, and there is no DNA linking the convicted killer to the crime scene. Of the case, Dan says, “What this judge has said is he still believes that the first account of one of the key witnesses was credible. What happens is this went to the appellate court, the appellate court said ‘yeah, we have some concerns about this cast, let’s send it back to a different judge to review the evidence,’ this judge reviews the evidence, and this judge would say, ‘Look, we have to presume that what a jury heard should generally be the final word.’ Now, there are extraordinary cases, and I would argue that this is getting pretty close to that line of being an extraordinary case.” Find out why here.