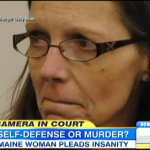 Dan appeared on Good Morning America December 30th to discuss the beginning of the trial for Roxanne Jeskey, a woman accused of torturing and killing her husband. Jeskey has pleaded not guilty by reason of insanity and the prosecutors and defense are painting two very different pictures of what happened. If convicted Jeskey will face from 25 years to life in prison. Says Dan, ” Another judge has looked as this case already, now that isn’t going to determine this case, but it’s interesting that another judge felt there were indications that she might be faking it, which makes it even harder for her in connection with this case. What does she have going for her in terms of her defense? Number one, she did have brain surgery and number two it seems pretty clear she was beaten. So her claim is not self defense, which I thought would be her defense and would initially seem to be her defense, but now it’s basically, she was beaten and that triggered an episode that made her unable to distinguish right from wrong.” Watch the full clip here.