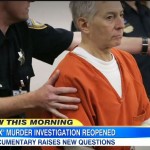 Dan appeared on Good Morning America, Tuesday, March 10th to discuss Robert Durst, the heir to a real estate fortune who was linked to multiple deaths back in the 1980’s but was never convicted.  One of the cases, the murder of Susan Berman, is now being reopened thanks to a new HBO documentary called “The Jinx”, in which Durst is profiled and tells his side of the story on camera.  Durst denies killing Berman but this new investigation could have an impact. Says Dan, “Remember, this is a guy who the local authorities believe is connected to a 1982 murder of his wife, the 2000 murder of his friend to cover up the 1982 murder and then charged in 2001 in the case that he, of course, was acquitted in. So the fact that he even cooperated in this [documentary] is astounding and so it’s not that surprising to me that now that they have Durst on camera and they have renewed attention to this case…Robert Durst could find himself in some big trouble.” Watch the full clip here.