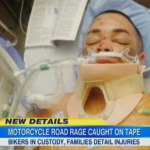 Dan was on Good Morning America today discussing the road rage incident that went viral on Sunday, between a group of motorcyclists and a family SUV on New York’s West Side highway. Several were injured in the face-off, but who is at fault, and what will happen? Answers Dan, “There are two issues: one is criminal, and the other is a possible civil case. On the criminal front, it sure sounds like the authorities are not going to charge [the driver.] Why? On a legal standard, did he reasonably believe that he was in danger when this happened? And when you listen to the way Ray Kelly, the police commissioner, is talking, it sounds like he may believe it was reasonable – they’re going to continue the investigation, but I don’t think there will be charges filed against him. Now, civil – which is the family’s ability to sue him – I think that is almost certainly something that will happen, because that’s just an opportunity for the family to go after him as opposed to the government.” For more, watch the segment here.