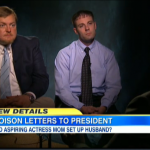 Today, Dan appeared on Good Morning America to sit down with the husband of Shannon Richardson, Nathan Richardson, for an interview after he was framed.  Shannon Richardson was charged in connection to the ricin letters sent to Obama and NYC Mayor Bloomberg last month after framing her husband for the crime.  Dan asks, “Just out of nowhere you’re wife points the finger at you as the ricin guy?  Nowhere?  No hints?  No suggestions?”  To which Richardson replies, “Nothing that comes to mind.  I mean, if I would have saw something earlier on, that I thought would point to anything this dangerous I would have blown the whistle on that a long time ago.”  Dan continues to prompt, “Why hasn’t he been ruled out then as a possible suspect?”  Watch the interview on here.