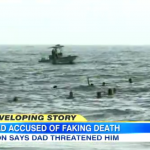 Dan appeared on Good Morning Americatoday to discuss the case of Raymond Roth, a man accused of faking his own death. Roth, of Massapequa, N.Y., was reported missing in waters off a Long Island beach and turned up five days later in South Carolina. His wife, Evana, alerted authorities that her husband, Raymond Roth, 47, was alive after she found emails he’d exchanged with his son saying his disappearance was an act, and now has asked for protection from him, saying she fears he might try to kill her. So will he be charged? And if so, with what? Dan says it’s important to remember what’s not a crime: “You’re allowed to leave, you’re allowed to lie to your wife, you’re allowed to lie to your son, you’re even allowed to fake your own death,” he says. “Except when you start crossing legal lines,” he continues, “for example, if you’re defrauding people, if you’re trying to engage in insurance fraud, if you’re falsely calling 911.” Dan posits that these areas will need to be looked into to determine whether or not he actually committed a crime, also explaining that authorities need to know what the son knew. What the authorities do is to be determined. Watch the segment here.