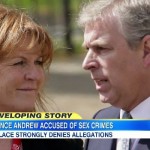 Dan appeared on Good Morning America, Monday, January 5th, to discuss the shocking sex allegations against Britain’s Prince Andrew.  Prince Andrew is the Duke of York and fifth-in-line to the British throne. The allegations, made in a Florida federal court, by a woman now identified as Virginia Roberts, claim that while working for American billionaire Jeffery Epstein, she was forced to have sex with various people and participate in sexual orgies. One such person being Prince Andrew. Says Dan, ” Typically the Palace doesn’t respond to this sort of stuff, but they have to respond to this and these allegations, they’ve now made three denials alreaady from a palace that normally doesn’t respond at all…” Watch the full clip here.