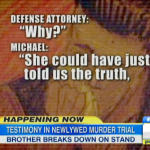 Dan appeared on Good Morning America to discuss the latest on Jordan Linn Graham, the woman accused of murdering her husband 8 days after they wed. Graham’s brother took the stand in the case on December 10th and supposedly “broke down” about his sister’s lie saying, “She could have just told us the truth”. Dan gives his opinion on the current proceedings. Says Dan,  ” This is the heart of the prosecution’s case, this is the strongest evidence that the prosecution has, they’ve got her statements which have “evolved over time”. She lied. That’s a problem for her but that doesn’t change the fact that I don’t see how you can get a conviction on first degree, premeditated murder here.” Watch the entire clip which includes Nancy Grace’s take on the trial here.