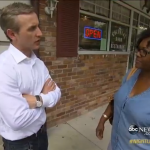 On Nightline Tuesday night, Dan discussed what would potentially happen if Zimmerman is acquitted.  In Sanford, Florida, there are some new questions, and for some, fears about what could happen, would happen, if he is found not guilty.  Dan says, “Some fear an uproar.  But both black and white residents in Sanford say that they don’t expect any response to be violent.”  With even the prosecution’s witnesses seeming to support the defendant’s case, people are beginning to speculate an acquittal.  Dan says, “At the courthouse, many now openly speculate about a possible not guilty verdict.  Some say that it’s entirely premature to engage in a not guilty verdict.”  Watch the segment here.