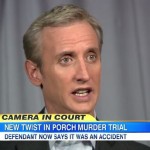 Dan weighed in on a report for Good Morning America about a shooting that occurred in Michigan, last November, when a man fatally shot an unarmed woman on his porch. Theodore Wafer is charged with second-degree murder, manslaughter and use of a gun during a crime for shooting and killing 19-year-old Renisha McBride, whom drunkenly disturbed Wafer in the middle of the night, pounding on his door. Originally, Wafer claimed self-defense maintaining that he intentionally fired his gun, fearing for his own life. However, a dash cam video shown to jurors revealed that Wafer claimed he did not know the gun was loaded when he fired. This conflicting report could be troublesome for the defense. Says Dan, ” You’re now saying it was a mistake, that’s a different kind of defense. Prosecutors are either going to argue, he’s not to be believed about what happened or you can believe him and his conduct was still so incredibly reckless that he should still be found guilty.” Watch the full clip here.