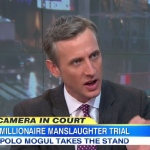 Dan joined the Good Morning America team on Thursday, October 23rd to discuss the retrial of polo mogul, John Goodman, accused of DUI manslaughter. Goodman pleaded not guilty and claimed it was a brake failure that caused the crash killing 23-year-old Scott Wilson. The prosecution claims he was drunk at the time of the accident ordering 18 drinks that night before driving. Goodman claims he only drank 3 of them and the rest were for other people. Additionally he claims that he didn’t get drunk until after the crash when he left the scene. Says Dan, “The heart of the prosecution is my Bentley malfunctions, that’s tough. This is the second trial. He was convicted the first time. He testified the first time. He’s got to convince the jury in a way he didn’t the first time. He’s added a couple things to the testimony. For example, saying he pumped the brake on the Bentley. Reached for the emergency brake. Things he didn’t mention in the first case. So that’s changing here.” Watch the full clip here.